Lorde caught a lot of heat after comparing her friendship with Taylor Swift to an autoimmune disorder, but the pop star has apologized for using her particular choice of words, as per her recent tweets on the controversy.

Even though we understood what the singer was trying to say, Lorde's choice of words were strange, to say the least. As expected, folks hopped on the singer, criticizing her for her lack of sensitivity, particularly towards Selena Gomez, another friend of Swift, who suffers from lupus (an autoimmune disorder).

In one reply to a critic, Lorde admitted her wrongdoings, tweeting, "didn't mention taylor, but regardless, i f**ked up & that was really insensitive. i'm sorry." It was a response that prompted relief from some devoted fans, including @melodramamp3, who happens to be a disabled follower with an autoimmune disease. Take a look at the tweets below! 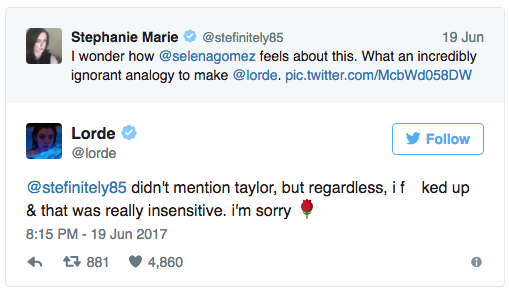